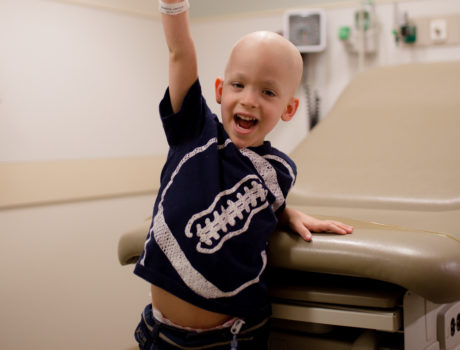 Did you know that each day 45 children receive a cancer diagnoses?

Today, we want to introduce you to Lincoln. He is a brave warrior who was diagnosed with Stage 4 Neuroblastoma at the age of 3 and became 1 of those “45” in September, 2017.

Immediately after hearing this news, he started 6 months of chemotherapy. However, because there was still so much cancer left, he also went through 4 rounds of painful immunotherapy and 24 sessions of radiation.

Thankfully, we are thrilled to share that as of June 2018 (after our interview), he received some amazing news! Lincoln was NED…no evidence of disease!

We hope you enjoy reading more about Lincoln, his favorite health tip, and how KICKcancER was able to support him. We also included some tips, which are based on Lincoln’s favorite food. 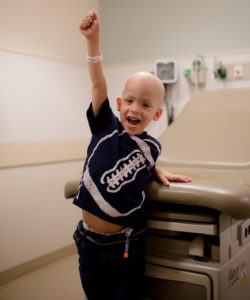 Anything outside, camping, throwing footballs, playing with brother at the park

Do the detox bath and castor oil detox. These are two things that I know have helped Lincoln with the effects of chemotherapy.

When Lincoln was diagnosed in September 2017, a fellow neuroblastoma mom sent me to the KICKcancER site. I spent hours reading the articles.

During the first round of chemotherapy, I signed up for the KICKcancER box and started implementing the detox baths, castor oil detox, and essential oils. Lincoln enjoys all of these easy and relaxing natural treatments. I decided that if I had to consent to chemotherapy and radiation that I would do everything I could naturally to help him fight the cancer.

Despite intense nausea and some weight loss, I feel that Lincoln has thrived through 6 very intense rounds of chemotherapy, 24 radiation sessions, and currently immunotherapy. I have many people telling me how good Lincoln looks, and I owe that to the prayers of those around us and organizations like KICKcancER who help cancer families learn about the benefits of a healthy diet, essential oils, and detox methods.

The doctor recently told us that Lincoln is nearly cancer free! We are so excited and can’t wait to hear NED …no evidence of disease.

Introduce yourself and your program
We hate SPAM and promise to never share or sell your email address to a 3rd party.
35 shares
35 shares